Digging Up the Facts on Low carb Potatoes

I don’t know about you, but I crave potatoes a lot! They taste great and are really versatile, but the down-side is they are also quite high in carbohydrate. Over the years I haven’t eaten a great amount of potatoes, because for me, it’s just not worth the amount of insulin I need to counteract the carbs.

But recently a couple of versions of 25% lower-carb potatoes have hit out shelves and can be found at most local supermarkets. When I first saw these though, I was a bit sceptical, because I couldn’t understand how on earth you could naturally grow a potato that was low in carbs.

A potato with 25% less carbs? How is that possible?

I assumed they had to be genetically modified, so I delved deeper to find out more. According to Foodwatch, it turns out these potatoes are actually a particular variety of potato that comes from cross-pollination, with a 20 to 30 per cent shorter growing period compared with most regular varieties. Yay, I was over the moon, so I decided to give them a try. 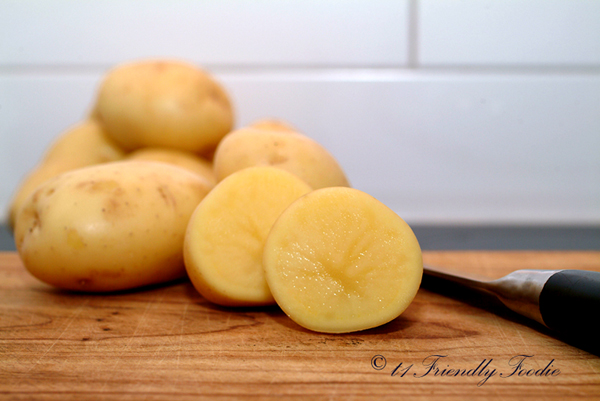 So far, I’ve come across two options of lower-carb potato including the Zerella Spud Lite and the NutriSpud Carisma potato.

If you’re after Carisma potatoes, I found I did have to search the shopping centre shelves a bit harder because the packaging is not overtly shouting, “low-carb”, so when they’re next to other packets of regular potatoes it can be tricky to know they’re lower in carbs unless you’re already familiar with the brand.

In any case, these little beauties are really tasty, fluffy and creamy and the texture is similar to the waxier varieties of regular potatoes such as Desiree. They are small and white in colour and very similar in look to chat potatoes. They are great served in pretty much any form including:

I haven’t yet tried them fried as chips, but I hope to give this a go soon.

For more information, check out Spud Lite and Carisma and don’t miss my Lower-carb Potato Dauphine post coming up soon, which makes great use of these yummy potatoes.