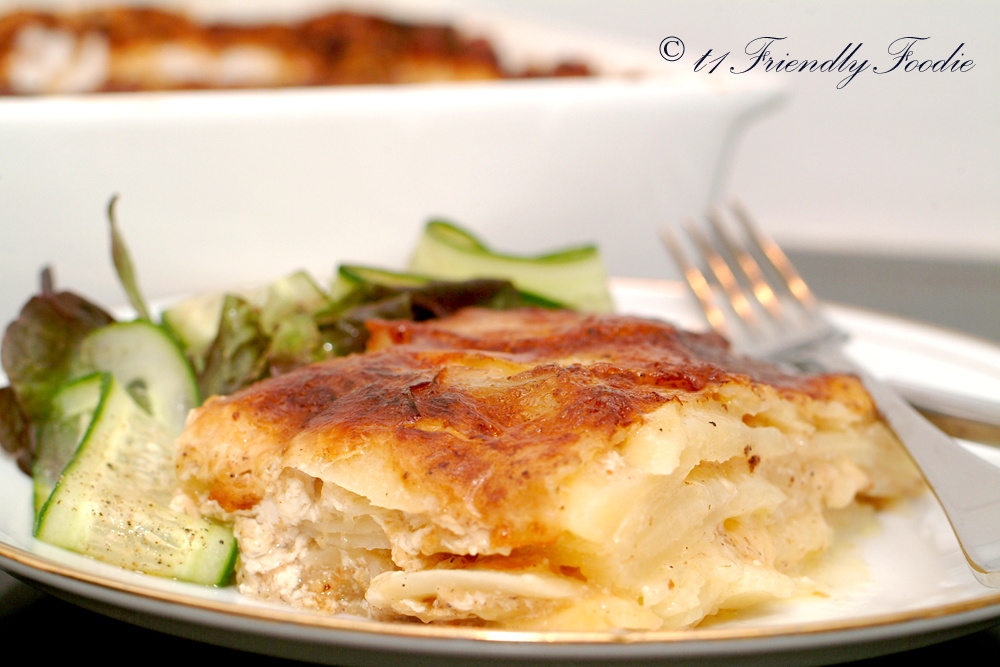 In my previous post, Digging Up the Facts on Low-carb Potatoes, I promised you a recipe using 25% lower carb potatoes which are available from most local supermarkets. Well here it is, my Low-carb Potato Bake.

This is my version of my mum’s potato dauphine, mine of course is lower in carbs though that hers.

My mum’s recipe has been one of my family’s favourite go-to dinner options since I was a child. I can remember her cooking it all the time for us.

After I was diagnosed with diabetes, I never really ate much of it, even though I wished I could. I found regular potatoes were just too high in carbs and not worth all the extra insulin.

Having recently discovered the wonderful world of 25% lower carb potatoes though, my dreams have come true and I’ve been able to conquer my potato cravings! 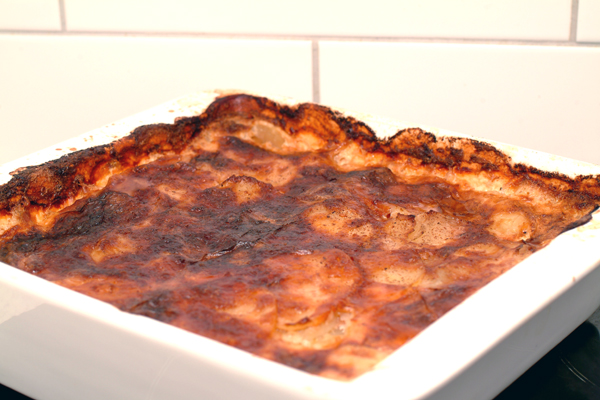 I recently put some 25% lower-carb potatoes to the test and transformed my mum’s old faithful recipe into a diabetic-friendly version.

One slice is roughly two portions (just under 30g of carbohydrate).

While this is great news, it’s probably more correct to say this recipe is lower-carb rather than low-carb, as the potatoes are 25% lower in carbs than standard potatoes but they are still a substantial source of carbs.

While my recipe is lower in carbs compared to a version using regular potatoes, don’t go crazy and eat the whole lot, watch your total serving size!

There are many versions of potato dauphine as well as gratins and both originated in France. The gratin traditionally features a breadcrumb and butter top layer, while the dauphine features potatoes baked in milk with a cheese layer on top.

My version not only uses lower carb potatoes, but is also slightly healthier as I don’t use butter or cream, only full fat milk and cheese, to keep the fat content down.

This recipe is pretty simple to make, but there is a bit of preparation involved, including slicing the potatoes and grating the cheese.

I made the mistake of grating my potatoes on a normal cheese grater the first time I made it. This turned out to be a bit dangerous as it was challenging to avoid slicing my fingers. So I highly recommend using a vegetable slicer with a hand guard to prevent any nasty accidents.

Potato dauphine is such a versatile recipe and works well as an accompaniment to pretty much anything from fish, chicken, lamb or beef. If you’re vegetarian, it also works well on its own with a nice big green salad!

So try it for yourself – I hope you love it as much as I do. 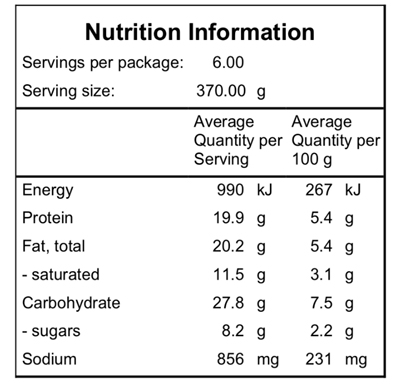